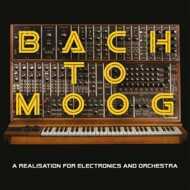 The iconic album Switched-On Bach by Wendy Carlos (originally released under the name of Walter Carlos) and Benjamin Folkman introduced the world to the Moog Synthesizer in the 1960s. It played a key role in popularizing Classical music performed on electronic synthesizers, which had until then been relegated to experimental and Pop music. Switched-On Bach was one of the first Classical albums to sell 500,000 copies. Commemorating the 50th anniversary of the Moog modular synthesizer, here's a brand-new album of music by J.S. Bach arranged in a compelling and contemporary way by world renowned composer and arranger Craig Leon, augmented by exquisite violin work by Jennifer Pike. Craig Leon was instrumental in launching the careers of many recording artists including The Ramones and Blondie. British violinist Jennifer Pike is renowned for her "dazzling interpretative flair and exemplary technique", and she has taken the musical world by storm with her unique artistry and compelling insight into music from the Baroque to the present day.