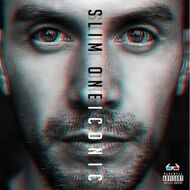 Roman producer Slim One teams up with MA legend Termanology as executive producer to bring his debut full-length "Iconic" to life. This first studio effort by the Italian beatmaker features some of the best names around, from legends such as Tek of Smif-N-Wessun, Ruste Juxx, Krumbsnatcha and Termanology himself to some underground buzzing ones such as Nems, Flee Lord and Chris Rivers as well as ST Records affiliates such as Ea$y Money and Artisin among several others.