Funkdoobiest – Which Doobie U B? 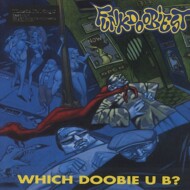 Which Doobie U B? is the debut studio album by the Latino rap group Funkdoobiest. DJ Muggs was the executive producer for this album. Tracks on the album are performed by Son Doobie and Tomahawk Funk, including additional Cypress Hill member B-Real on the track "Wopbabalubop". Hence the album is very much in line with the Cypress Hill productions.

"It all works anyway", according to Allmusic review writer Steve Huey, he continues "Muggs is in his absolute prime as a producer here, and Son Doobie's rhymes are fittingly surreal and stoner-friendly, albeit more cartoonish than menacing like his Cypress counterpart".

The album title derived from a line in an episode of the 1970s sitcom What's Happening!!, when the main character, Raj, is introduced to special guests The Doobie Brothers.