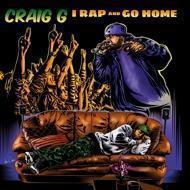 I Rap and Go Home is the result of smart choices, experience and a willingness to stick to what you're good at!

We live in a confusing, terrifying world of Donald Trump and Brexit. Maybe, under the current circumstances, a little throwback to the '80s isn't such a bad thing. Craig might not have been as steady or reliable as his Juice Crew buddy Masta Ace, but it's surprising just how solid I Rap and Go Home is. It's compact, straightforward and a lot of fun, the kind of album you can happily put on in the background when you don't want to think too hard or pay too much attention. The songs themselves still knock. The album has a single producer, VaporWorldz, a choice that gives it a coherence and clarity that other records don't have.

Plus, there are some nice guest surprises: Craig tag-teams with Ras Kass, Buckshot and Rock on "365," and trades barbs with Jarobi on the grimy "N.I.O.M.M." There's even a surprise appearance from Canibus — surprising, that is, because he doesn't screw it up. The guests never overwhelm, never outstay their welcome.