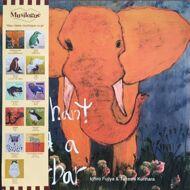 This time Musilogue highlights the artwork as this reissue comes with screen-printed letters of the title and artist name on the front.

Ryota Nozaki(Jazztronik) has just launched a new project called “Musilogue”.Musilogue is a cultural music project by musicians who are active in many music scenes. At the moment 60 musicians are already involved in Musilogue.We believe professional musicians are artists and artisans .We can create new kinds of high quality music through our collaboration.To record this music and to introduce a new style of working for musicians is Musilogue’s biggest theme.On the other hand Musilogue has a plan to start teaching music to people who want to enjoy music more and also to become professional.

Musilogue has released its 1st album “Elephant and a barbar” by Bass player Ichiro Fujiya and Sax player Takeshi Kurihara.This album was originally made for selling at venues where they would play.Due to popular demand Musilogue decided to release it more widely.Ichiro Fujiya is an amazing bass player who has supported Jazztronik for 10 years and also other Japanese pop music artists.Takeshi Kurihara started off in the underground scene and since then he has supported many artists like Soil&pimp sessions,Kyoto Jazz Sextet and Jazztronik.Ryota Nozaki(Jazztronik) plays piano and Rhodes and has composed 2 tunes (8)(9) on this album. Effective guitar is played by Arata Inoue who is active in the underground music scene in Tokyo.Musilogue has chosen young creator Ryo Kawahara as a remixer for a bonus track.“Elephant and a barbar” is their own style of New Jazz with a deep and sometimes ambient feeling across the album.
This is an album where you can feel the progress of Music.