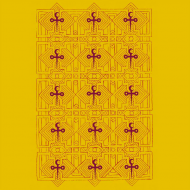 Limited Edition Of Only 100 Copies !

Emmanuel Armando Coto was born and raised in Hollywood, CA. A self-taught artist & musician, COTO first learned to play the bass, then swiftly graduated to drums and then ultimately the guitar.

Jamming and recording everything by himself in a cozy Rampart apartment, the "COTOWN" sound was born in late 2014. Months spent in the desert recording with mystic Gonjasufi honed his skills even further, meanwhile back in L.A., a group of ace musicians began daily sojourns to COTOWN, contributing new instrumentation, technology & magic.

The seven visceral songs on COTO's debut EP [HNR61] were all recorded at COTOWN during this fruitful period in 2015. These debut recordings shine the first golden rays on this journeyman's archetypal quest.

Back to Overview
« Previous Product Next Product »
Tape
Ready for shipping
No ratings.
recommend
You have to be logged in to write a review or rate.