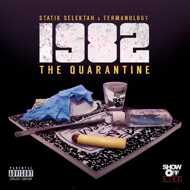 Three days after the WHO declared the Covid-19 virus a global pandemic, and cities across the country were weighing what steps to take to contain its spread, Statik Selektah and Termanology—who record together under the name 1982—announced that they’d be using the mandated time indoors to make a new record. The album would be called The Quarantine, and its creation would be livestreamed. They invited a dozen guest emcees to join them in the studio—this was before strict “social distancing” measures had been imposed—conducted a marathon 11-hour recording session, spent the rest of the night mixing and mastering the record, and dropped the finished product the next day. Fittingly, the album’s cover depicts the elements that presumably were involved in its creation: a surgical mask, gloves, hand sanitizer, a pen, a rhy.