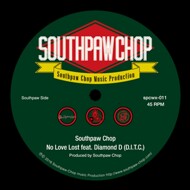 Following the remix and re-release of the underground smash hit “Here We Go” featuring Large Professor, Southpaw Chop returns with yet another dope collaboration with an east coast hip-hop legend.

This time, Southpaw Chop teams up with Diggin’ in the Crates Crew (D.I.T.C.) founding member Diamond D, a true hip hop veteran on production and the mic, dating back his work in the late 1970’s as a DJ for Jazzy Jay.

The new release, entitled “No Love Lost” features a thick drum break and unforgettable sampling from Southpaw Chop, matched with the lyrical mastery of Diamond D. The collaboration yielded an instant classic, harking back to the golden days of D.I.T.C. and the roots of hip-hop, reminiscent of classics like Diamond’s own “With the Dope Sound”. With a limited seven inch vinyl release, this is sure to be one of the most sought after records of 2017.

Back to Overview
« Previous Product Next Product »
Vinyl 7"

Definetly sold out
No ratings.
recommend
You have to be logged in to write a review or rate.