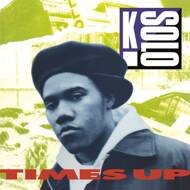 K-Solo is an American rapper who was part of the Hit Squad in the 1990s. He released two albums under his pseudonym K-Solo. His second album Times Up was released in 1992 and peaked at number 36 on the Billboard Top R&B/Hip-Hop Albums. K-Solo rapping style is slightly aggressive and the music itself is based on a sample-heavy format. Lyrically it's pretty diverse, focusing on themes as prison life, crime and daily struggles.