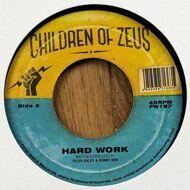 Exactly a year on from 'Travel Light', we release the final single from Children of Zeus' debut album. A dinked 7" single, containing one of the stand-out tracks from the album, 'Hard Work', and a re-vocalled Lover's Rock version of 'The Heart Beat' (a demo version of which appeared on 'The Winter Tape' from Christmas 2018).

'Hard Work' is a term than can easily summarise the past twelve months in the life of Tyler Daley and Konny Kon. They've been busily touring Australia, New Zealand, South Africa, Europe and the UK twice in that time, as well as rocking shows at countless festivals across the continent.

'Travel Light' was named "Album of the Year" by Complex Magazine, BBC 6 Music's Huey Morgan and Rinse FM's Jyoty, as well as taking 2nd place at the Worldwide Awards (for which their label First Word was named "Label of the Year") and numerous high-placing's from Fact, Mixmag, The Vinyl Factory, Juno, Bandcamp, Mi-Soul, Wordplay & Piccadilly Records, amongst numerous other notable selectors, blogs, tastemakers and musicians, with fans far & wide from Radio 1's Benji B to Chase & Status, Jazzy Jeff to Lily Allen, Stormzy to Goldie.

The depth of styles & genres included on 'Travel Light' confirmed that Tyler & Konny are not easy to put in a box. Their initial inspirations of Manchester pirate radio in the 80's/90's all make up to form the sonic tapestry of hip hop, soul, r&b, broken beat, jungle and, in this instance, reggae.

One of the album's biggest surprises was this now-anthemic track, 'Hard Work', which sees Tyler Daley effortlessly ride a one-drop riddim drenched in positivity, and is a highlight in their live sets, as anyone who's witnessed will testament to. Meanwhile, the flip-side transforms the quiet storm vibe of 'The Heart Beat' into a heavy, heavy dubwise track, creating an essential accompaniment and fitting sequel to the original lick.

Back to Overview
« Previous Product Next Product »
Vinyl 7"

Delivery in 2 to 3 weeks
No ratings.
recommend
You have to be logged in to write a review or rate.