Sarathy Korwar & Upaj Collective – My East is Your West 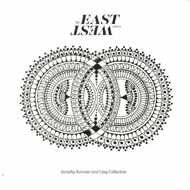 The recent resurgence in popularity of spiritual, cosmic, and deep jazz and found a new generation of diggers pillaging through the crates, uncovering some often neglected gems. It’s also led to renewed analysis on some of the aesthetics utilised in that era, chiefly the manner in which Indian classical music was appropriated, regurgitated in ways that were sometimes inappropriate.

Composer, musician, and band leader Sarathy Korwar is a self-confessed fan of this area, but looks at it through a different lens: born in India, he is keenly aware of the out-of-sync power relationships, and the sometimes wonky takes on Indian culture that permeate this arena.

So he decided to do something about it. The UPAJ Collective is a group of both Eastern and Western musicians formed to play a one off show at East London’s semi-mythic Church Of Sound, a crucial crucible for the current outpouring of energy in the city’s jazz scene. Blessed with a warm, supportive, and appreciate audience, the collective were allowed to stretch out, newly analysing the work of composers such as Alice Coltrane, Joe Henderson and more in a respectful but no less revelatory way.

‘My East Is Your West’ is a lavish triple LP document of that evening, and it’s a sweltering, exhausting, spiritually enhancing trip, one that enraptures at every turn. ‘A Street In Bombay’ is the perfect primer, and you can practically hear the musicians stretching their muscles, pulling and pushing at the fringes of the composition.

‘The Creator Has A Masterplan’ was initially penned by Pharoah Sanders, a real cornerstone of spiritual jazz; it’s testament to Sarathy Korwar’s vision, then, that the group find renewed space in the composition, re-charting the foundations while remaining true to the essential message of the original.

Joe Henderson’s ‘Earth’ is a given a prolonged, groove-heavy re-working, while the two-part ‘Malkauns’ is a remarkable collective achievement, shifting through different moods and tones, before erupting into unrestrained group-led joy.

A lengthy, heady experience, ‘My East Is Your West’ could so easily stray from the tracks it has laid down for itself – after all, at three slabs of vinyl there’s a lot of potential for musical wayfaring. It’s testament to Sarathy’s leadership, then, and the full band itself, that the album remains such an intense, incisive listen.

Making you reconsider totemic moments in jazz, this feels like an important record, one that opens up a conversation that has largely been excluded from the mainstream for much too long. Above all this, though, is the sheer marvel of the musicianship, the endless innovation, the continual improvisation that makes ‘My East Is Your West’ such a surprising, and truly enjoyable listen.

Back to Overview
« Previous Product Next Product »
Vinyl 3LP