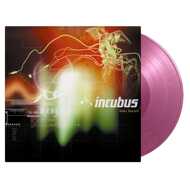 Merging Nu-Metal grooves with Funk, Rock, and Hip Hop, Incubus carved their own musical niche and earned a huge following by tireless touring and releasing ever-improving quality albums. Their Southern Californian vibe resonated with fans all over the world highlighted on Double Platinum album Make Yourself (with the radio hit "Drive”). Incubus returned to the studio shortly after touring in support of S.C.I.E.N.C.E. [MOVLP694] and released Make Yourself in 1999. It further expanded their fan base by entering the album charts and selling over two million copies. The hit "Drive" indeed drove the popularity of this five piece from California leaps forward. Available as a limited edition of 2000 numbered copies on velvet purple (purple & red marbled) Colored Vinyl.