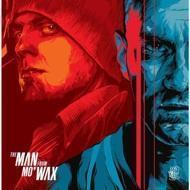 Soundtrack album to the forthcoming documentary The Man from Mo’ Wax that charts the life of pioneering UK electronic/trip-hop figure James Lavelle, whose presence in the scene as a DJ, producer and label head remains pivotal today, nearly three decades into his career.

The soundtrack features tracks from the film that chart the life of Lavelle + his label Mo’ Wax including:

The film features interviews with DJ Shadow, Joshua Homme of Queens of the Stone Age, Massive Attack’s Robert Del Naja (3D), Ian Brown, Futura, Thom Yorke and Grandmaster Flash who help tell the remarkable story of one of the most enigmatic yet influential figures in contemporary British culture. Unearthed from over 700 hours of footage including his exclusive personal archive spanning three decades, The Man from Mo’ Wax is an exhilarating, no holds-barred ride through Lavelle’s career highs and lows.

The film will be released in selected cinemas nationwide on the 31st August – celebrating the 20th anniversary of the seminal UNKLE/Mo’Wax album release of Psyence Fiction. There will a launch event at the BFI Southbank, the home of British cinema. Album will be released same day as the film to combine marketing efforts