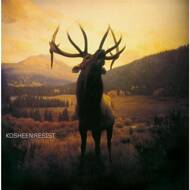 Kosheen were a British electronic music group consisting of singer-songwriter Sian Evans and songwriters/producers Markee Ledge and Darren Decoder. Their first album Resist was released in 2001 and includes their hits “Hide u” and "Catch". The album was a small move from Markee and Darren's previous work in the drum 'n' bass music. These influences are combined with a more poppy approach, creating music close related to the trip-hop and rock genre. “Hide U” and "Pride" were both featured in the soundtrack for FIFA Football 2003. The entire record is an enjoyable trip and as affective as it could be.

Delivery in 2 to 3 weeks
1 Rating
recommend
You have to be logged in to write a review or rate.