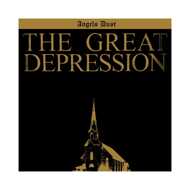 Angels Dust return to the Hit+Run imprint with their new release “The Great Depression”.

Back to Overview
« Previous Product Next Product »
Vinyl 10"