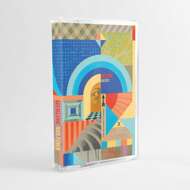 Obvious is the fact that nobody produced an album like this before. These tracks were sampled over and over... making them becoming Hip Hop standards. However it's not the only way to consider this rich musical production.
Today, original copies became very expensive, gaining value with the uncredited fame of beatmakers uses, and not only for the scarcity factor, but mostly because the music is amazing.

From the eponym "Solstice" to the medley of 3 famous tracks of Alain Goraguer's "La Planète Sauvage", to the walking beat version of René Costy's "Scrabble", Medline assemble a pair of four aces, in a pure amplified soul way.
40 years after the release date of Brian Bennett's "Voyage". It was time for a rebirth.