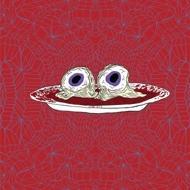 bAd bAd started in 2012 when Christian Zamora and Eli Maness started making noise in the foggy outskirts of San Francisco’s Sunset District. Joined by Christian’s brother Michael and drummer Patrick Webb, the band obsessed on the faraway sounds of Peruvian 60s legends Los Saicos and the Turkish guitar melodies of Erkin Koray, as well as Link Wray.
After a year or so of playing hyperactive spaghetti western instrumentals and now based in Oakland, bAd bAd started incorporating other influences: the pop-infused punk of Jay Reatard, one-chord Hawkwind power jams, Soft Boys-style psych, and the highbrowed playfulness of the Suburban Lawns. Disparate sounds, yes, but bAd bAd turns them into exciting buzzsaw pop with Barrett/Floyd interludes. bAd bAd started recording their debut album in 2015, perfecting it until it became a seamless psychedelic pop piece of punk energy. This is addictive stuff!

bAd bAd has released a couple cassettes and a 7” on Grabbing Clouds. They’ve played with everyone from Guantanamo Baywatch to The Men, and play regularly with their pals CCR Headcleaner, The World, and Terry Malts. Already with a strong local following, bAd bAd will be touring the West Coast in November 2016 and the US in Spring of 2016.