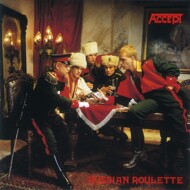 Accept's seventh studio album Russian Roulette is the last one to feature Udo Dirkschneider as a lead vocalist until his return in 1992. It was their way back to the heavier and darker sound which wasn't present on their previous album Metal Heart. The final album of Accept's golden years features some first-class bangers and some of their more infectious pop-metal. They recorded a few of their more catchy songs, even if the lyrical content is much darker compared to earlier recordings. The riffs fit very well in the context of the songs and fans of heavy and power metal should definitely listen to this album.

Accept is a German heavy metal band from the town of Solingen, originally assembled by former vocalist Udo Dirkschneider, guitarist Wolf Hoffmann and bassist Peter Baltes. Their beginnings can be traced back to the late '60s. The band played an important role in the development of speed and thrash metal, being part of the German heavy metal scene, which emerged in the early to mid-80s.