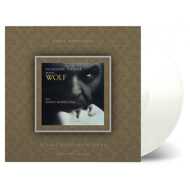 Will Randall gets bitten by a wolf while driving home in Vermont and his life changes dramatically as he starts getting more aggressive and slowly transforms into a werewolf.