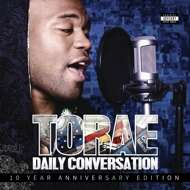 For The First Time On Vinyl!

Torae’s breakthrough project ‘Daily Conversation’ is finally getting a vinyl release for it’s 10th anniversary. The project that started it all features production from DJ Premier, 9th Wonder, Marco Polo, Khrysis!!!, Black Milk & more. “Since it’s release people have been asking for me to put it out on wax. Myspace days, up to DM’s on twitter. So I figured a 10 year anniversary release would be dope. And what better way to celebrate some new vinyl than on Record Store Day” says Torae about the thought process behind releasing ‘Daily Conversation’ now. Torae has gone on to release 2 solo albums, 2 collaborative albums & 2 mixtapes since dropping ‘Daily’ in early 2008 but it’s still held as one of his most popular projects.