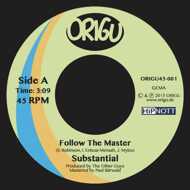 When Stan B. Robinson was given the moniker, Substantial, the Maryland born MC was anxious to know why the name was chosen for him. His friend replied, “It’s a word with many meanings, mostly positive. Real, strong, essential, influential. It represents the music you make.” The bar was set high from the onset. His first album was released in 2001 and his new album is due early 2016.