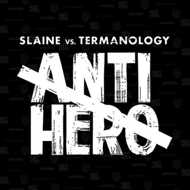 Since the beginning of their respective careers, Slaine and Termanology have been on a seemingly inevitable collision course. Over more than a decade, with each new album or devastating verse, the two New England hip hop heavyweights have continually raised the stakes, providing each other the fuel to push their lyrical intensity and creative output to new heights. As individuals, they helped spark a renaissance of classic East Coast hardcore rap; as a team, joining forces for the long-awaited full-length collaboration LP Anti-Hero this fall, they are cementing their status as battle-tested kings of the underground.

Backed by an all-star roster of veteran producers and guest emcees, Slaine and Termanology have created an album that distills their distinct talents and points of view into a cohesive artistic vision that is sure to become an instant classic. Moving comfortably from swaggering showcases of lyrical prowess to highly personal and evocative songwriting, Anti-Hero proves that, even after all these years, Slaine and Term are still pushing each other to grow stronger.