Lords Of The Underground – Keepers Of The Funk (Blue Vinyl) 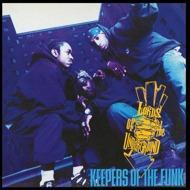 Keepers of the Funk is the second record by the Newark hip-hop trio Lords of the Underground. The variety of the beats and the energy of the different rappers can be felt in the gritty, rock-solid and low-end groove tracks. Influences of funk music increased and their rap flows are still worthwhile to listen to. Whereas their debut was somewhat harder and grittier this is a more structured recording. Deep hard beats, smooth basslines and horn samples are mixed to perfection on the 13-track record.

Lords of the Underground consists of MCs Mr. Funke, DoItAll Dupré met DJ Lord Jazz. They recorded a couple of remarkable albums during the 1990s.