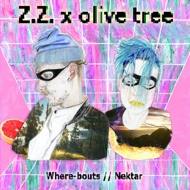 "Z.Z. x olive tree" is a cross-hemisphere collaboration that grew out of a chance meeting outside a record store and later that day at a jam session in the musical melting pot of Melbourne City, Australia. Olivia, native of Cologne, Germany known extensively for her work with Relaén. Ziggy Zeitgeist, native of Melbourne, known for his work with future soul collective 30/70. Brought together over a mutual love of hip-hop and jazz they soon began an exploration into the frontiers of nu-soul music.